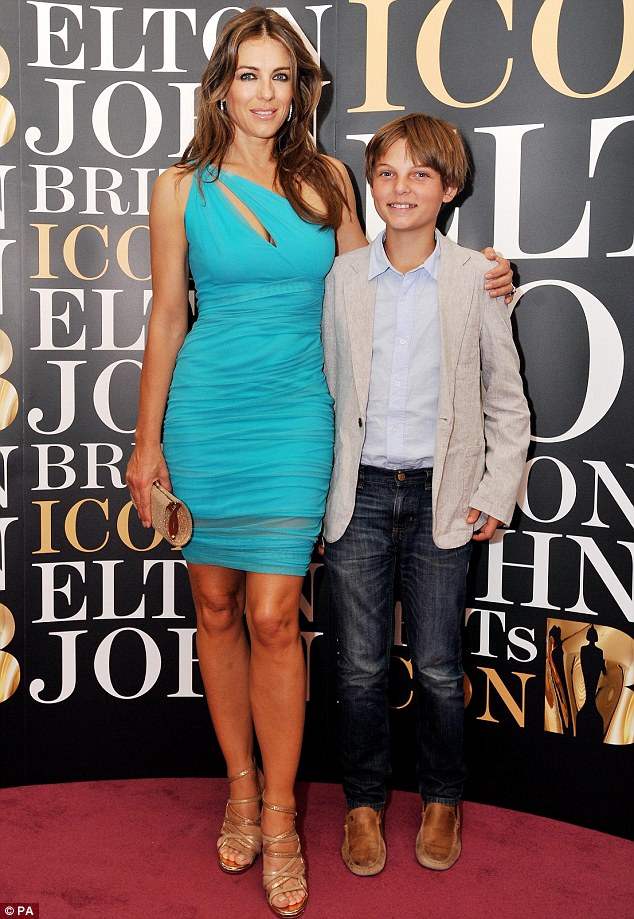 She is accompanied by fiancé Shane Warne to the Star-Studded event maximum times. But on Monday there was someone special to the frame. On the BRITs Icon Award Ceremony she was spotted with Damian her son. Sir Elton John is the proud godfather of Damian and Liz wanted her son to see his godfather receiving the prestigious Award.

On the red carpet the pair of mother and son was looking wonderful. Liz, 48 years and Damian 11 years both posed smartly on the red carpet at London Palladium. Liz is the beauty chick as always. She appeared as the screen-siren as she always does. But there was something special in her appearance on Monday. She was catching everyone’s eyes with her one shouldered bright aqua mini dress. She took the dress from Versace. If we talk about Damian, he was equally thrilled about the event. He looked excited about his godfather being honored in front the greatest personalities of the industry.

Liz complimented her height with golden strappy sandals. These sandals were making her tall at the same time complimenting her toned legs. She took a golden simple clutch bag in one hand. She kept her brunette hair loose and opened. Her hair was little tousled and her locks were giving her a mesmerizing look. As far as wearing jewelry was concerned she wore silver drop style earrings.

Liz made all preparations for herself beforehand. She was decided what to wear and what to carry. But she admitted that she struggled in brushing the hair of Damian for the evening. She tweeted to her followers that she is very excited to watch Elton receiving the Brits icon. She posted this on her twitter page before arriving at Palladium. 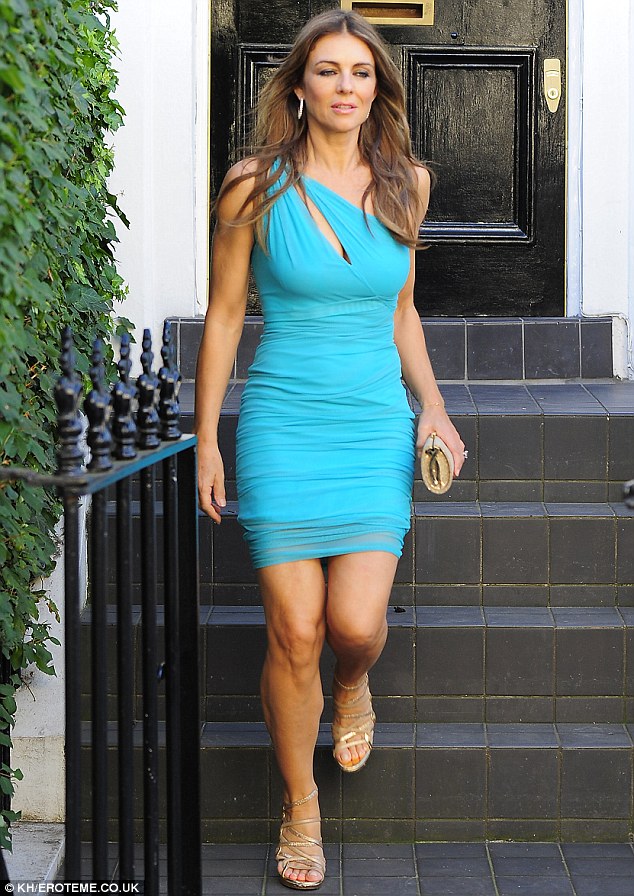 Liz and her son Damian belonged to the attendees to see Sir Elton honored with the music award on the inaugural of the special ceremony on Monday. Sir Elton is addressed as the All time Entertainer. He proved it to the audience at London Palladium. He did live performance for the audience with his best songs of all time. Not only this, he performed on some of his melodies from “The Divine” his upcoming album. Sir Elton was showcased with his award which he was holding proudly.

Liz’s efforts went not at all in vain. She was successful in making Damian look groomed and perfect. His perfection was captured by the cameramen present at the event in the evening. Damian gave some of the smartest poses at the Red Carpet. Apart from them there gathered a number of big personalities from the music world. Liz Hurley and Damian are the treasured friends of Sir Elton. But apart from them there were many other who gathered there for congratulating Sir Elton.

The music personalities from the Pop world who were spotted at the event on Monday were James Blunt, Lulu, Pixie Lott, Gary Barlow and many more at the event. Everyone looked happy and beautiful at the event. It is quite expected from everyone being a part of a prestigious event of all time.

Summary: In this post we shared the latest appearance of Liz Hurley who got accompanied by her son Damian at the BRITs Icon Awards. Liz gave a show stopper look n her aqua mini dress. Damian was looking stunning. Keep reading www.beautynstyle.net for more celebrity news.