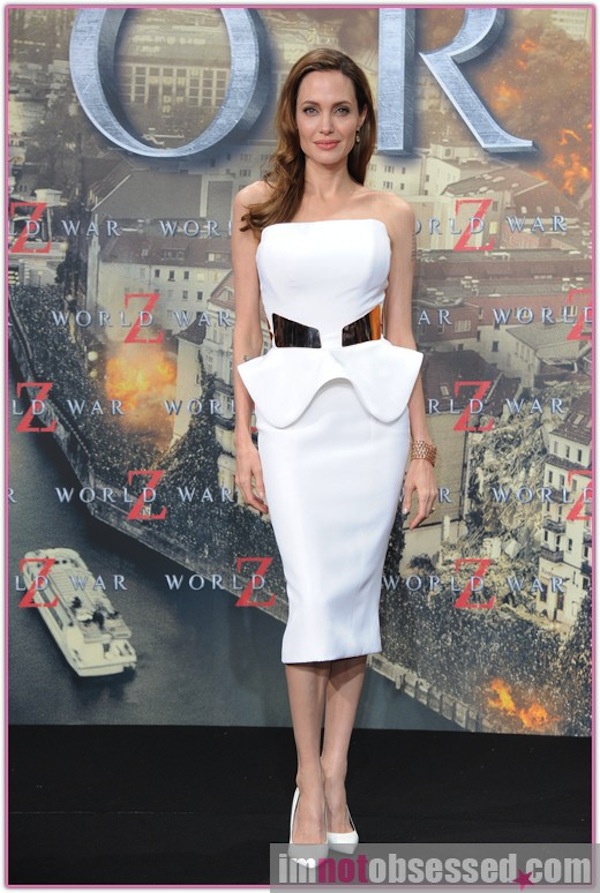 Anjelina Jolie the unmatched actress of Hollywood was not seen in a movie since last one year.  The reason behind this was she underwent double mastectomy as a preventive measure.  It was discovered that she had a chance of developing the breast cancer that to 87%.

The good news is she has decided to work again and start acting in movies. On Sunday, she was spotted talking to the crew of the new film Unbroken in LA. The interesting thing is that she is going to direct this movie. She is 38 and is brave enough to take the decision. She wore a black long skirt and a white blouse. She was looking elegant in her outfit.

It was earlier in this year when it was revealed that she would be undergoing the operation. But Angelina was firm on her decision and never let any emotion change her decision. After she announced about her operation she was seen with Brad Pitt, her husband, in the summer. She joined her husband on the red carpet as a support for his movie, World War Z. Post her successful operation the actress is seen concentrating on her latest project. Being the director of the movie Unbroken she is showing her sense of responsibility to the same. She is very positive with the story of the movie which has been written by Coen Brothers.

With the way the brave actress showed her interest in the new project it is quite clear that she loves her work a lot. The movie Unbroken would revolve round a runner of Olympic Louis Zamperini, who was imprisoned during the Second World War by the Japanese forces. Angelina was spotted carrying a big hand bag along with one huge folder on Sunday.  Thus, it is quite clear that her health cannot stop her from working. It also shows that she is researching a lot to bring out a real story to the audience. On Sunday, she was found in two outfits one different from the other while she was directing the movie.

She was operated by the renowned surgeon of Breast cancer Dr. Kristi Funk. Last week her surgeon spoke about Angelina’s decision.  Dr. Funk also treated Sheryl Crow, singer, had an interview with Mario Lopez. In the interview she revealed that the decision that Angelina took was not at all based on fear. Previously it was not decided that she would undergo double mastectomy. But knowing Angelina’s family history she must have taken the decision in the future. Dr. Funk even said that the the decisaion was not taken in a single night. Angelina was found carrying the cancer gene BRCA1, which increases the chance of getting ovarian cancer by 50%.

As far as the health of Angelina is concerned her surgeon said that she is absolutely perfect. Brad Pitt’s way of supporting her wife throughout the treatment had helped Angelina to recover faster. Dr. Funk said that Angelina had made people aware of the breast cancer to a greater extent and it’s her life saving nature.

Summary: In this post we have shared the latest news about Angelina’s a appearance at the sets of Unbroken this Sunday. She has become an inspiration to all the women round the world. Keep reading www.beautynstyle.net for more interesting and latest celebrity gossips.