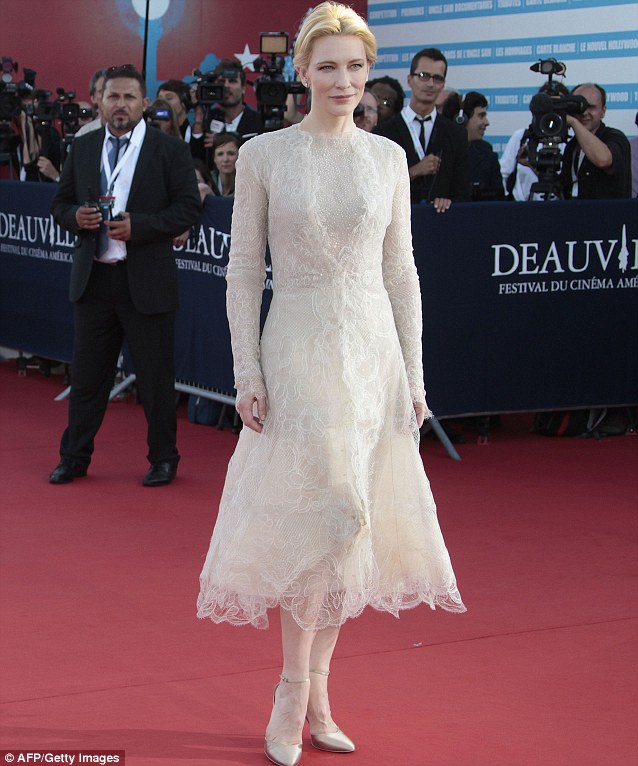 Cate Blannchett has entered the opening of the 39th Deauville Film Festival in a gorgeous outfit. Cate is considered as one of the most talented actress that Hollywood has. She has always shown her elegance and style in choosing her dresses especially for the red carpets. It was the Friday night when she made everyone give her a wow look as she was looking as stunning as always.  She is considered as one of the screen sirens from the classic times to put everyone else behind. The ivory colored lace dress was giving a perfect complement to the alabaster skin of Cate. The vintage lace-dress of Cate was making her look simply gorgeous. The metallic heels that Cate was wearing were perfectly matching to her cocktail dress. The actress has an awesome selection ability which makes her stand apart from the crowd. She had simply updo her blonde hair which suits her face as always. She put a light shaded lip gloss on her lips and wore a pair of diamond tops. Altogether Cate Blanchett was looking stunning at the opening of the 39th Deauville Film Festival in Normandy. Cate appeared there for promoting her movie ‘Blue Jasmine’. She received this latest offer from one and only Woody Allen and her new movie have already started receiving rave reviews. The actress glowed throughout the ceremony and was looking truly younger to her original age. This is the reason is considered the timeless beauty of Hollywood. The things that made are look different from the rest were her dress, make up, hair style, shoes and of course her smile. The way she waved her hands to her fans showed her style. She had really set a style statement for others at the 39th Deauville Film Festival in Normandy. About Cate’s role in Blue Jasmine; she is playing the leading role as expected. The name of her character in the movie is Jasmine who is a socialite of Connecticut. Her life becomes difficult with a half-sister when her husband being financial crook get exposed. The role of Cate’s (Jasmine’s) husband is being played by Alec Baldwin. Sally Hawkins has played the role of the quirky sibling named Ginger. The story portrays the struggle of a lady with a quirky sibling and a financially crook husband. The movie Blue Jasmine is going to be a proud part of French Film Festival. This year the French Film Festival is going to celebrate the cinematic offerings of America. In this competition 14 films are going to participate. The story of Blue Jasmine is expected to touch the heart of the viewers. The cast and the crew of the film are very much excited with the selection of the film in the competition. Every members associated with Blue Jasmine are looking forward to the performance of the movie in the competition. Vincent Lindon is going to be the presiding jury member. Cate Blanchett had shown her excellent dressing sense and styling ways to make other follow her. The Blue Jasmine is expected to give Cate another reason to smile…. Summary: In this post we have showcased the latest appearance of Cate Blanchett at the 39th Deauville Film Festival. She was looking fabulous in the shimmering ivory color lace dress. Keep reading the latest celebrity gossips and news at www.beautynstyle.net.