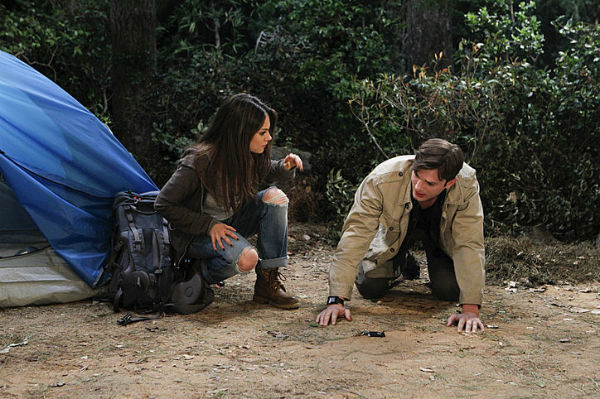 Guys, I know that right now Ashton Kutcher is most famous as the man who’s having a baby with Mila Kunis. But let’s not forget about Two and a Half Men! It’s easy to forget about Two and a Half Men if you haven’t hung out with any middle-aged relatives in a while, but that’s Kutcher’s job right now. And it turns out that Kunis is joining him as a guest star in an upcoming episode, so that later they can tell the Kunis-Kutcher spawn, “See, you were making the funny alongside Jon Cryer when you were merely the size of a pinto bean!” I’m just kidding, Mila and Ashton—please don’t make the baby’s last name Kunis-Kutcher. All the famous parents in the world cannot save a child with a name that close to “cootie catcher.”

Check out the first shots of the couple on Men:

I haven’t watched this show much, but it seems like every time I do, the female guest star is showing up looking like she just washed ashore after three months doing light drugs on a stranger’s boat. Here they are eating Chinese food, which I suppose could be a belly-concealing shot. I have watched enough Scandal this season to know what a good table can do.