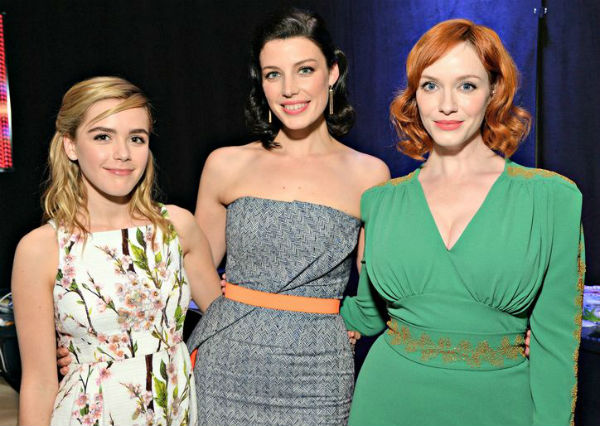 If you ever get the opportunity to interview the cast of Mad Men, there’s one thing you need to know: Never ask what’s going to happen unless you want Vincent Kartheiser (Pete Campbell) to look at you like you’re absolutely nuts. So I racked my brain (and turned to you guys on Twitter) to find out secrets from the cast at last Friday’s Paleyfest that have previously gone unreported. No spoilers necessary. Glamour: What happens when you finish shooting each day? Do you take off all the retro makeup and hair or go home as is?
Jessica Pare (Megan Draper): It depends on how tired I am. If I want to get the f— out of there really quick, I’ll just wear my hair in a ponytail and the full makeup, which is kind of crazy. Sometimes I stop to run errands on the way home and it’s totally awkward!
Christina Hendricks (Joan Harris): Well, my hair is part my hair and part a piece, so I have to take my hair down. I try to wash my face, but sometimes I have to go to the UPS store and I’ll have all the lashes on. I realize I might look like I’m crazy, but the people at the UPS store know me! [Laughs]
Elisabeth Moss (Peggy Olson): I literally will go to Starbucks and forget I have the f–king makeup still on, and then wonder why everyone is looking at me! I will peel my false eyelashes off in the car and then toss them out the window! Sometimes I see them in my shower, and they look like bugs and scare me. [Laughs] Kiernan Shipka wore Dolce & Gabbana, Jessica Pare wowed the crowd in a ruffled Roksanda design, and Christina Hendricks paid homage to the late L’Wren Scott in one of her designs. [Not pictured: Elisabeth Moss in Pucci].

Glamour: This is from Twitter follower @SnazzyO: What’s your favorite thing your character has done?
Jessica Pare: I was a huge fan of the “Zou Bisou Bisou.” I loved that. And the scene in my dressing room on the soap opera when Don and I have a fight and I get to pull off my wig—it’s a really weird thing to do, especially on camera, but I loved it because she’s so passionate.
Kiernan Shipka (Sally Draper): All the stuff that she does with Glen is really fun. I’ve just enjoyed seeing their friendship grow, especially since he’s one of the only kids you’ve seen Sally interact with that isn’t one of her brothers.
Christina Hendricks: Leave her husband.
Jon Hamm (Don Draper): Whether it’s going to Palm Springs, which really wasn’t Palm Springs, it was Chatsworth—cool house, though; a lot of the cool location stuff has kind of been the best stuff. The best feelings I get are just working with these actors and getting to do these really wonderful character moments.
Vincent Kartheiser (Pete Campbell): I won’t play favorites. More interesting tidbits:
*Kiernan Shipka on Jon Hamm being a real-life father figure: “He’s such a good guy, and it’s been interesting watching him become a mega-star. He still opens the door for you, will hold your makeup bag—it’s just so nice to see him be so humble, and it’s a great lesson to learn from such a cool guy.
*This Friday, the cast starts shooting the last half of the final season, which won’t premiere until next year.
*Creator Matthew Weiner locked in what the series finale would be while he was in the midst of working on seasons four and five.
*Jon Hamm doesn’t know what the end will hold for Don, but “I just want him to find peace.”
*Vincent Kartheiser once had a dream that Pete Campbell was looking through a window at him. “It creeped me out!”
*Kiernan Shipka spoke quite eloquently about the season six finale where Don shows his daughter where he grew up: “It was really the first moment where Don and Sally had an understanding. She didn’t know anything about that before. It’s a really beautiful scene, it’s one of my favorites.”
*Jon Hamm said that Betty (January Jones) and Don would “probably not” be getting back together.
*Jessica Pare revealed her most memorable moment from the show was the day that Megan got engaged to Don. “I didn’t know what was going to happen, so Ellen, our prop master, came in to measure my ring finger, and I gasped. When she put the ring on my finger, I was like, ‘Yes, yes!'”
*Jon Hamm’s most memorable moment: “Probably the first day we started shooting. Having to say all these words that I had been thinking about for how many weeks, and meeting all of these people and seeing the set and all the stuff come together. And being terrified and exhilarated all at once. [Remember], this was producing a show for a network that had never produced anything original.”