Kim Kardashian has been not only struggling hard to lose weight after the birth of her first child in June, but also she has been discussing her efforts to shed some weight. She is the famous reality TV star who appeared in a commercial modeling for latest Kardashian Kollection, and her beautiful post baby figure undoubtedly made the viewers stunned. She is looking extremely gorgeous in a plunging black dress. Black is a color which describes the pins of your figure so clearly especially if it is fitted to the body. It looked amazingly beautiful at the Kim’s flawless figure. Loose figure, belly fats or no other signs of a baby birth were visible and Kim was stunning as ever.

She appeared in that commercial with her two sisters, Khole, 29 and Kourtney, 34 but still she succeeds to capture the eyes of viewers. Kim has shed 50lbs within 4 months of her baby’s birth.
She is so dedicated to her fashion profession that she says, “It has been our dream, not the fame, the fashion”. 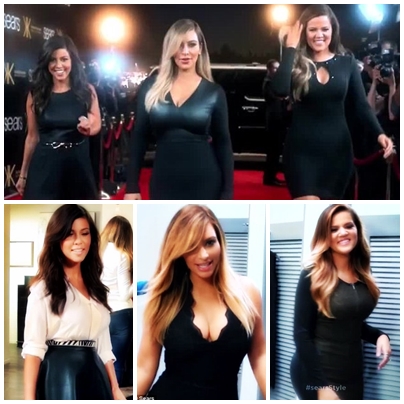 Kourtney is wearing a white shirt with conventional black leather skirt while Khole is dressed in a skin tight black outfit. Two of them are the co-designers of  Kardashian Kollection.


The Kardashian sisters undoubtedly look enviably stunning in their best advertisement of their own designs. Kim, 33, changed her outfit afterwards and chosen a less revealing black dress. This one also got fitted to her perfectly shaped figure.
On the catwalk, she joined her sisters. Both of them were wearing red while Kim was in black. Even at the catwalk, she looked like the queen of hearts and her figure won many hearts. She said on a talk show that she is feeling quite excited about her newly trimmed figure as she has lost 50lbs. She gave the credit to The Atkins Diet.

‘Actually I got on the scale today and it said that I am 50lbs down. That made me so excited,’

She excitedly added in her interview on a talk show.

It looks like when she was pregnant, and carrying approximately 50lbs extra with her, she was quite disturbed due to her fat figure. Some bloggers openly taunted at her fat body so it is the greatest achievement for sure that she is back in her old jeans.

Kim Says, ‘It really hurt my soul, It changed how I am in the public a little bit…There were these stories where I was, like, 200lbs.

‘I was gaining weight because I was pregnant and it was really hard to read all these stories and hear all these nasty things. And I think people sometimes question, they think I’m out “in hiding” now.’

Another celebration for her is the proposal of her daughter North’s father Kanye West o nher 33rd birthday last month.