By now you guys have heard the incredible story of how Veronica Mars, the movie, came to be, but when Kristen Bell and I sat down to chat last month, I wanted to dig deeper. So I enlisted our own super fan Nikki Ogunnaike to come up with questions that Kristen has never answered before. And you know what? Based on the amount of times Kristen responded, “Wow! I’ve never thought about that before!” I think we did our job. So without further ado, read on Marshmallows! 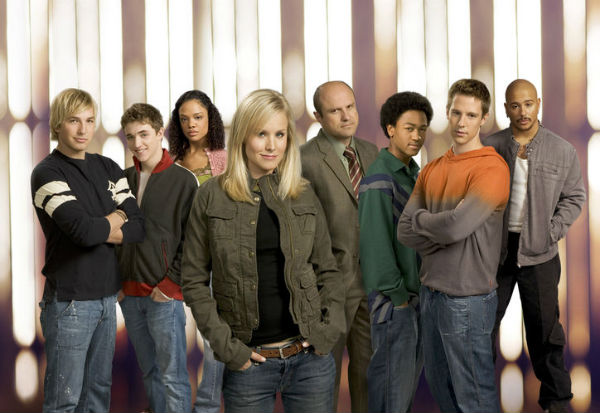 Glamour: You shot the movie in 23 days. How hard was it to get everyone’s schedules coordinated?
Kristen Bell: It was initially daunting, but those 23 days ended up working out perfectly. That was in part due to the fact that the majority of the cast still works in television, and this was television’s main hiatus. We lucked out majorly.

Glamour: Who has changed the most since Veronica Mars went off the air?
Kristen: We’ve all changed dramatically because we all have mini-me’s now. Our kids play together, which is lovely.

Glamour: So in 20 years we’ll see Veronica Mars: The Next Generation!
Kristen: Yeah, exactly! In 20 years our kids will be volunteering in our senior citizen’s home!

Glamour: I know that creator Rob Thomas purposely left the season three finale wide open in hopes that the show wouldn’t be canceled. Where do we pick up now?
Kristen: We have fast-forwarded 10 years, and in those 10 years, we have met a Veronica who needs to simplify her life. She is desperate to escape the drama and thinks if she can adapt a normal person’s lifestyle, then she can live happily. But the more she runs away from who she is, the more trouble she runs into. She’s living in New York, trying to be just an everyday gal. She’s still snarky, and she’s still herself at her core, but she’s attempting to create the elements around her to be not as turbulent as they were in Neptune. She hasn’t talked to Logan in 10 years.

Glamour: Rob said the movie is about “Veronica accepting her destiny.” Do you agree with that?
Kristen: Absolutely. If you were to sum up the entire movie, that’s exactly what it is. 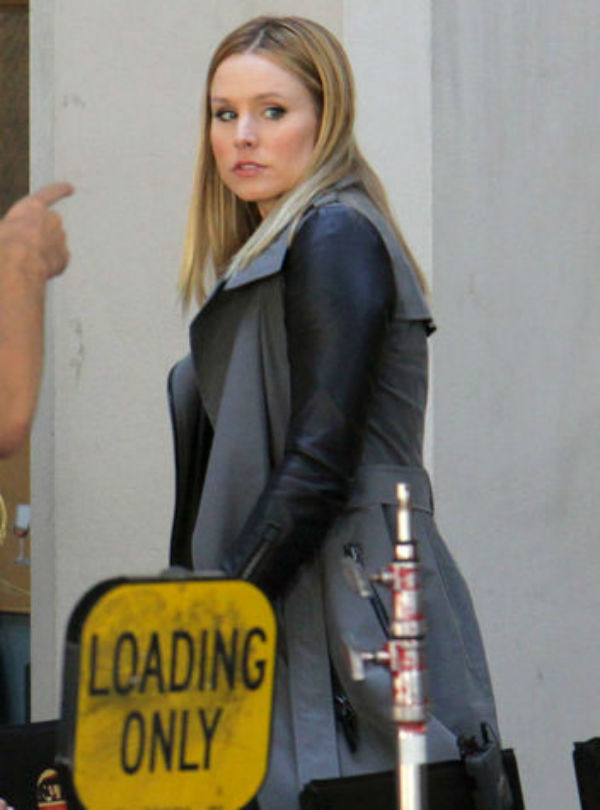 Glamour: Was your husband [Parenthood‘s Dax Shepard] a fan of the show?
Kristen: Interestingly enough, when we first started dating and fell madly in love, he said to himself, ‘Great, now I got power through 60-something episodes of this show about a teenage private detective!’ And he committed to doing it because he wanted to see something that was significant in my life. He was being a good partner. He put it on and two episodes in, he was so addicted. He went through the entire season in about seven days. To this day he says it’s one of his favorite shows.

Glamour: Did you watch it with him?
Kristen: I watched a couple episodes with him, but I was more of a casual viewer because I know what happens. I’d ask him about something that didn’t pertain to the show, or even something that did, and I’d get a big “Sssshhh!” and leave the room. [Laughs]

Glamour: Was there a particular storyline he was super passionate about?
Kristen: [Calls out to Dax: Hon, was there a particular storyline you were super passionate about? Max? You didn’t like or did like it?] Oh, he was angry at me for not pursuing Max Greenfield. [Laughs] He said he has an eye for talent and look what he’s become! He really did gravitate towards Max and was very angry at Veronica when that relationship blew up. He said she was being short-sighted and childish!

Glamour: If Meg were alive and didn’t die from the bus accident-induced coma, would you guys be friends—and what do you think she’d be doing?
Kristen: Oh wow. Yes, we would be friends, but the kind of friends who only see each other a few times a year because Meg is just too sweet for Veronica. Veronica needs a little bit sassier. I think Meg would probably be in the child-care profession.

Glamour: Was there ever a moment that you thought Wallace and Veronica could ever date? Did you love their platonic friendship or wish for more?
Kristen: What an interesting question. I’ve never thought about that before. Of course they could because they get along so well, and Percy is so charismatic and handsome as Wallace. But I think that Veronica is nothing without her partner-in-crime, so I don’t think it would ever work out with them. That’s because she’s more of a sounding board, and your friends forgive you a little bit easier than your significant others do I think.

Glamour: Now speaking of significant others, I know your husband said he wanted more scenes with you and Max, but was he Team Logan or Team Piz and why?
Kristen: [Hey bud, are you Team Logan or Team Piz and why?] He said, “Woah, f**kin’ Piz!” He said one guy is brooding and creating an infatuation with you and the other guy is a legit match and creates this stable life-partner. He said you can only stare at each other for so many years. [Laughs] [Kristen yells to Dax, “I love you!”] He’s the best. 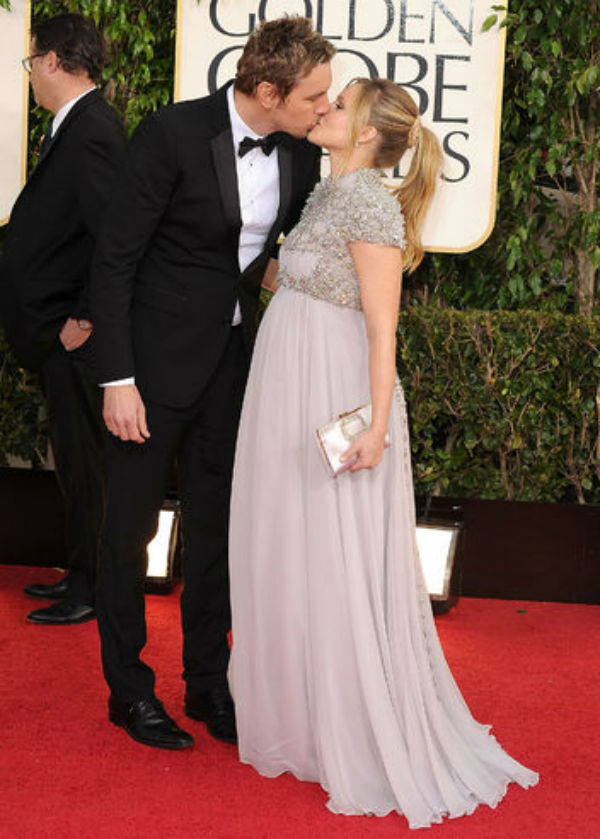 Glamour: Thanks to what you guys did with Kickstarter, is it true that some fans got walk-on roles in the movie?
Kristen: Oh, yeah. We obviously funded the movie through Kickstarter, and what was really important to us was that people thought it was worth it. Kickstarter allows you to give a lot of things away to help in the fundraising. So for the higher level rewards, we offered tickets to the premiere, tickets to the after-party, but we also offered…one guy bought lines in the movie. We also gave away extras in the movie. They don’t have lines, but they fill every party scene, and they came from out of town all over the country. We fully recognized they spent their hard-earned money on that, so we set up these lunch tables and had lunch with everyone, got them all glammed up, and just had a great time.

Glamour: Let’s go back to the guy who bought the chance to have lines in the movie. Was he totally freaking out the whole time?
Kristen: He was delicious. His name was Steve, and it was the highest reward we had. We didn’t even think anyone would buy it. It was $10,000 and he bought it immediately. He has a wonderful personality, is a huge Veronica Mars fan, and when I met him on set, introduced himself as 10K! He said, “Hi, I’m Steve! 10K!” He was so lovely to be around because it’s one of his favorite shows. He spent a couple days with us, and we treated him like the king that he is.

Glamour: I know getting this movie made was quite the journey. There were so many high highs, and so many low lows, so how did you maintain your sanity throughout all of it?
Kristen: It was very difficult, don’t get me wrong, but it wasn’t torturous because we were always working in hypotheticals. It wasn’t like we had a start date and had hired everyone and then had to give everyone bad news. Rob and I had a barometer for the interest of the film, granted it was still a gamble, but I based it on the fact that I do a lot of interviews and there hasn’t been an interview in the last seven years where the journalist didn’t ask, “And will there be a Veronica Mars movie?” It was Rob’s agent’s idea to start the Kickstarter campaign, and the studio said, “We don’t know what that is. No thank you.” And then we said, “F**k it, we’re just going to shoot the video and show them what we’re talking about.” Warner Brothers loved it, but they still said no. Six months later, there was a change, and the people in the Warner Brothers digital platform said, “This could be major.” Thankfully that’s what gave us our green-light.

Glamour: And what’s next for you after this movie?
Kristen: I hope more. We wouldn’t have been able to make this movie if there wasn’t an audience that didn’t want to see it. So I’d like to know what they want. I loved making it low-budget. It was so much fun. Maybe it exists in a Netflix series, which I know Rob would love to do. But I don’t know. I’ll let the fans tell us what they want next. Maybe this is the end of Veronica, but I certainly hope that’s not the case.