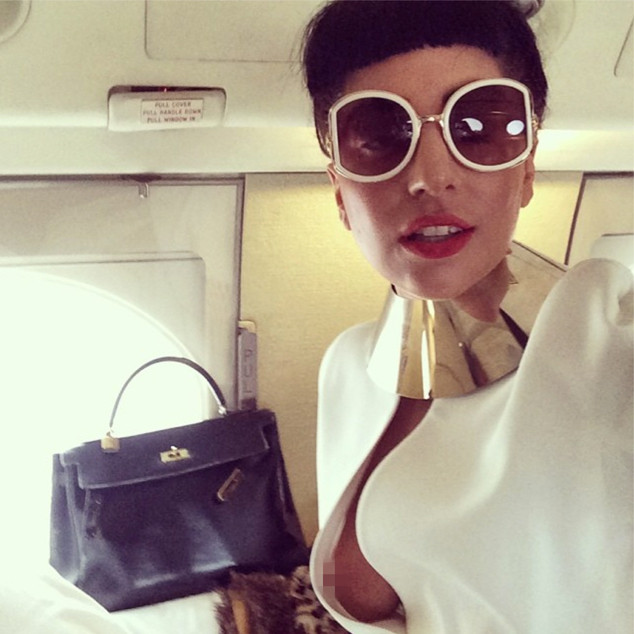 Lady Gaga posted on Friday, July 18 an Instagram photo that shows one of her breasts peeking out of her low-cut white outfit. She is sitting inside a plane and smiling, slightly.

“FASHUN: Vintage Mugler on the plane Listening to Miles Davis My favorite is Flamenco Sketches,” she said.

The picture was also posted on the 28-year-old pop star’s Facebook page. The singer also sported a cropped black wig, ivory gloves and peep-toe heels with thick straps, white sunglasses and a thick, golden choker, as seen in another photo, which shows her leading her French Bulldog, Asia, on a leash by the airstairs of what appears to be a private jet.

“On my way to The Yellowstone Club in Montana to see @jeffkoonsstudio for a talk about Art,” she said.

Lady Gaga is known for her wild and risqué looks, which are sometimes used to make a statement. It is unclear if the exposure of her bare breast was intentional. She did tweet later on Friday, “Where is the face palm emoji when u need it.”

Instagram’s community guidelines state, “Please do not post nudity or mature content of any kind.” Many women, including Miley Cyrus, have via revealing photos expressed their support for the “Free the Nipple” campaign, which aims to fight such censorship in a bid to “decriminalize the female body.”

Bruce Willis‘ and Demi Moore‘s 22-year-old daughter, Scout Willis, shared pics of herself walking topless in public in late May, saying, “Legal in NYC but not on @instagram.”