All of us at Glamour have been waiting for Divergent for what feels like forever. I chose to pass the time by hitting up everyone involved with the film for behind-the-scenes goss that would indulge my movie-nerd/nerd-nerd heart. (I could have talked with the production designer about creating a dystopian landscape for days.) Here’s everything you need to know about the looks, the stars, and post-apocalyptic Chicago. 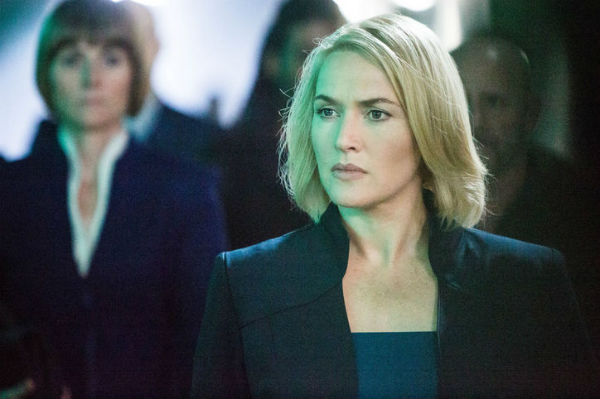 Making the costumes was a global affair. Costume designer Carlo Poggioli had just six weeks to make the bulk of the film’s looks. “We had a huge amount of work to do in such a short time,” he says. So he enlisted workshops all over the world. Dauntless and Abnegation’s costumes were put together in sewing rooms across Europe while the leading cast’s looks were churned out on location in Chicago.

Candor was the faction that was toughest to dress. An original design was tossed because “their colors, black and white, and the shape didn’t distinguish them enough from the other factions,” Poggioli says. “But we [adjusted] and found a good agreement.”

The basis for Kate Winslet’s costume? Science. Literally. “The inspiration for her style was the shape of a labcoat I saw and liked very much,” Poggioli says of Winslet, who plays leader of Erudite in the film. “Of course, she contributed to the final look. She is amazing to work with.” 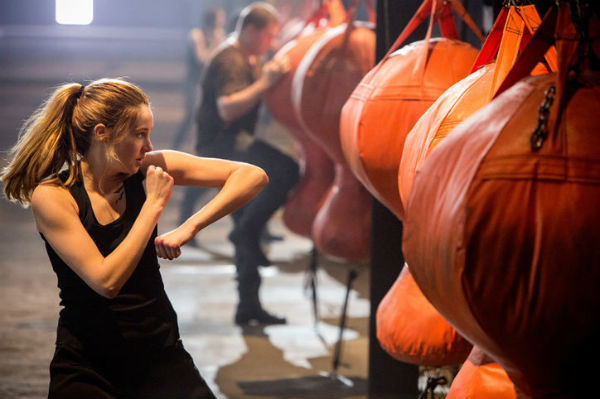 Shailene Woodley’s favorite part of training: shooting. “She loved training with guns,” says stunt coordinator Garrett Warren. Also, he confirms, just like the rest of us, Woodley “sometimes had to be motivated to do cardio—she’s not a fan of doing a repetitive activity in one spot for too long.”

Her most formidable opponent was the weather. “Fitness-wise, her biggest challenge was performing the fight scenes for such a long period of time, all day, in such cold weather,” Warren says. “The scene where she fights Peter [played by Miles Teller] was especially hard on her, and so was the one where she’s running to catch the train. She fell once, but got right back up.” To prep, Woodley trained three to five days a week for four weeks in Chicago before shooting began.

What was her exact fitness routine, you ask? Warren lays it out: 90 minutes of stretching and cardio (biking or jumping rope), followed by push-ups, chin-ups, tricep dips and abs work. To finish it all off: a session of fight training or gun training, and 15 minutes of knife training. “She would sleep in on weekends but still train,” Warren says. “Her treat would be a massage.” 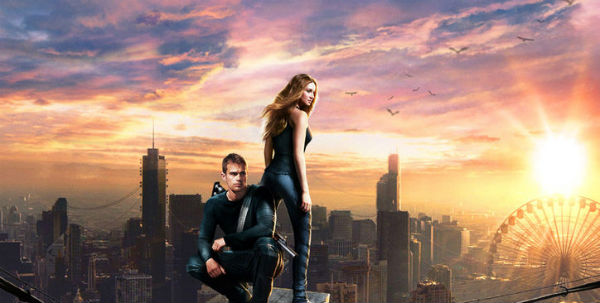 Those enormous buildings you see in the film aren’t sets or digital creations—they’re real Chicago warehouses. In the city’s old manufacturing buildings, production designer Andy Nicholson found spots that didn’t even need much enhancement—they looked, essentially, “the way buildings would look 150 years in the future, if they had been maintained on a minimal level,” he says. The best find of all? A giant—and completely empty—cavernous building. “All of the fight scenes were shot in this warehouse that was 600 feet long. Six hundred feet away, someone looks really small! It would have never felt as big if we built it.”

The fence from the book got supersized. “One of the first thoughts I had was that the fence—which is chain-link with gates in the book—had to be a strong presence,” Nicholson says. “I thought it should be big enough that you wonder what the hell it’s keeping out. We decided that maybe the reason it’s so big is that it’s blocking radio frequencies.”

Each faction’s surroundings was painstakingly matched to their nature. For example: “Erudite is [seen as] a little bit better than everybody else, so they have beautifully maintained, modern, clean interiors,” Nicholson says. “Dauntless has sparse warehouse spaces; it doesn’t matter to them where they are. It’s not about creature comforts. Abnegation has a minimal, calm aesthetic, which helps them focus on their selflessness. I thought their homes should be made of composite materials. I researched disaster relief architecture, and I also came across this technique used in South America in which two guys can build a whole house without any heavy machinery, by just pouring concrete. We also used recycled wooden floors in Abnegation.”

A genius guru hotline helped the movie get the tech details right. The Science and Entertainment Exchange helped Nicholson reason out how gadgets and infrastructure might work in a post-apocalyptic world. “You can call them up and ask them, ‘How would cars work in 100 years if we stopped developing them now?'” Nicholson says. “They also helped us specifically with the mind and computer interface solutions, solar and wind power, and the tattoos, because we do it in a chemical way rather than with needles.” 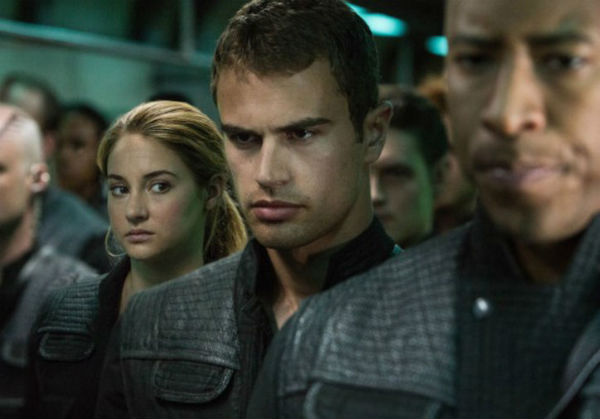 Four’s lair was the hardest location to find. “From talking to fans, I knew that all of the girls were desperate to know what Four’s apartment looked like,” Nicholson says. “It had to be magical. Finally, we saw a building that used to be a garage and had been converted into recording studios. Four’s apartment is up on the roof. It felt up in the air, secret and tucked away. It was the last location we found.”

And speaking of Four: Theo James told us how the guys spent their free time while shooting in Chicago. “Miles [Teller], Christian [Madsen] and I were homeboys,” he says. “We got quite into the Blackhawks and the Bulls. And we had rap parties. Miles likes to spit the lyrics. I can beatbox, though my bass notes aren’t quite good. If it ended up on YouTube, it would ruin all of us.”

Ashley Greene was spotted on Monday when she was filming a scene in Los Angeles for her upcoming horror-comedy, Burrying the Ex. She is quite familiar because of her Twilight series, now the viewers hope something as fabulous as her previous movies. She is portraying Evelyn and Max, her boyfriend’s role is played by Anton […]

Colors seem to be scattered everywhere as celebs appeared with their little ones in the most entertaining Christmas party at Oxford street venue this evening. Spotting a few of them over here! Denise Van Outen, holding little Princess Betsy’s hand stepped in. She was wearing a stylish jumper printed with big white polka dots. Being […]

Destiny Hope Cyrus, or as we all know her, Miley Cyrus was born on November 23, 1992 is a well-known American actress and recording artist. Cyrus, the daughter of great country singer Billy Ray Cyrus, gained fame as a teen idol after being cast in the famous Disney channel television series Hannah Montana, in which she portrayed the main character of […]