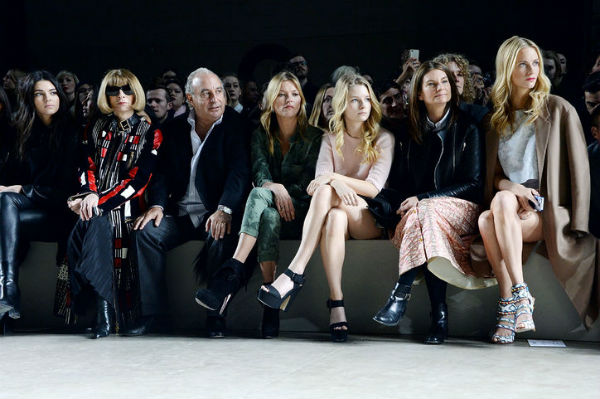 Is Kendall Jenner having the best London Fashion Week ever? The Kardashian-tangential little sister made her mark on the industry earlier this fashion month with her debut high fashion catwalk for Marc Jacobs in New York. Immediately after, Jenner jetted off to London and was cast by stylist Katie Grand in Giles Deacon’s fall 2014 show.

Check out her edgy London look: So, with two major shows under her belt during her debut fashion week season, what’s a girl to do next? Why, sit next to Anna Wintour at the Topshop fashion show, of course. You might have heard last week that Jenner recently shot a feature for Vogue.com—a series of selfies wearing fall’s hottest looks. Jenner is the first of the Kardashian clan to get Vogue‘s seal of approval—Kim has been desperate for a Vogue cover for years and years, but no-go. And now, with Jenner sitting front row at a show next to Anna? We can’t wait to see what happens next! Jenner is currently rumored to be dating Delevingne’s ex, One Directioner cutie Harry Styles—but eagle-eye Harry-watchers noticed this week that while Styles turned up at the Burberry Prorsum show to see Delevingne walk, he didn’t manage to make it to Giles’ show to see his rumored current-sweetie Jenner. Hmm. What could it all mean?