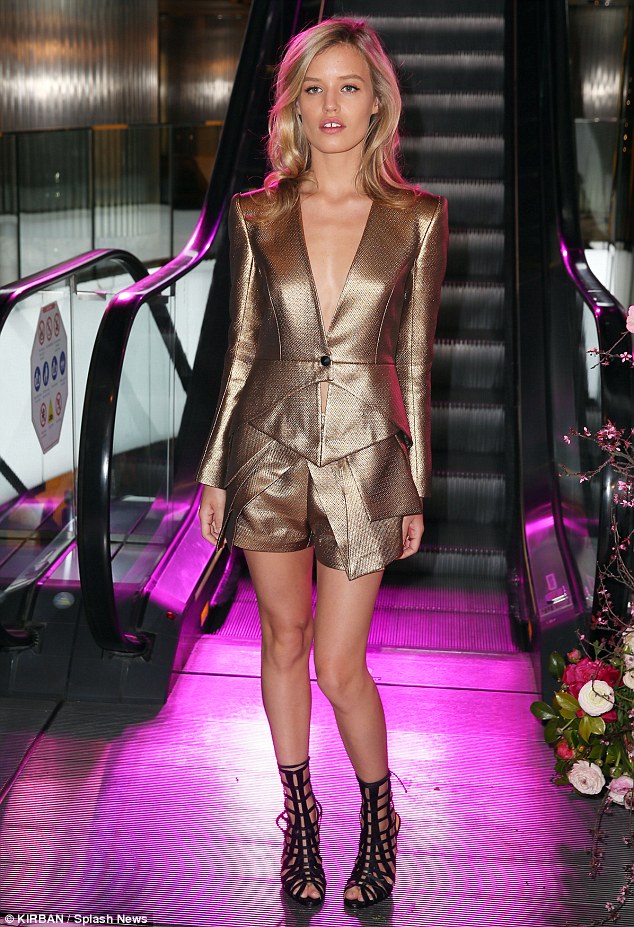 A girl in a golden Sass set the fashion launch on fire this Tuesday. It was Georgia May Jagger who came in to the fashion launch in a Gold Sass with bide jacket and shorts. She was looking stunning in this complete outfit. She gave fabulous poses to the photographers at Westfield Mall and was an eye catcher in the crowd.

In this fashion launch there were top short Australian Models but Georgia was stealing the show. She was appearing as a Golden Goddess in her outfit in Sydney. She is very well successful to keep up her international Appeal in 30 days Fashion & Beauty. This was Georgia’s third appearance which gave her immense popularity.

Georgia’s popularity is no longer dependent to her parents Jerry Hall and Mick Jagger. She has made her own ways to grab the attention of public. She is smart enough to choose her outfit and catch the attention of the people around. For her Golden outfit she selected the stilettos of gladiator style which was again a show-stopper pick.

Georgia May used minimal make up on the fashion launch. She chose the make up brilliantly. She did not go with too much of make up as her outfit was bit glossy. She used very little bit of make up to complement it well with her Golden Suit. She used a bit of eye liner and a light lip gloss. If we talk about her hair; she left it loosed and at the same time slightly waved. The best part was she was not wearing single piece of jewelry not even a pair of earring.

According to Georgia May she loves visiting Australia because it is nice place. She added that she loves the Australian people as well as the beaches here. She said that she wants to keep on coming to Australia. When she was asked about the difference between the fashion here and in England; she said that it is almost similar. She added that the people in London are fond of wearing jackets, big jumpers and coats. Georgia May said that people of Australia are trying out different things which is making them different. The cuts and prints used by the Australian designers are not only different but unique as well.

The British Model Georgia May Jagger along with Jesinta did the job as an ambassador wonderfully. It was only last week when Georgia’s beloved pet died. It was named as pooch and Georgia was really close to it. It was a real traumatic experience for Georgia but her dearest pal Cara handled everything very well. It is the strong personality of Georgia May that she came out of the trauma and made herself stronger. She left every pain behind and showed up to the fashion launch this Tuesday. According to the latest gossips she has left the footprints of her fashion in Australia and her dressing sense is being highly appreciated. It is proved that she is not only popular in UK but is leaving impressions throughout the world.

Summary: In this post we have discussed about the latest appearance of Model Georgia May Jagger in the fashion Launch. She is in the limelight because her golden goddess outfit and stilettos of gladiator style which caught everyone’s eyes. Keep an eye on www.beautynstyle.net for latest celebrity gossips.