Even though I’m no longer a teenage girl (far from it, *sigh*), I’m completely obsessed with Reign. (Although, really with racy moments like that, um, stairwell scene in the premiere, maybe the show is geared toward more mature audiences anyway.) It’s like Game of Thrones meets Gossip Girl meets The Tudors and like all three, the costumes are just as scintillating as the story-lines. 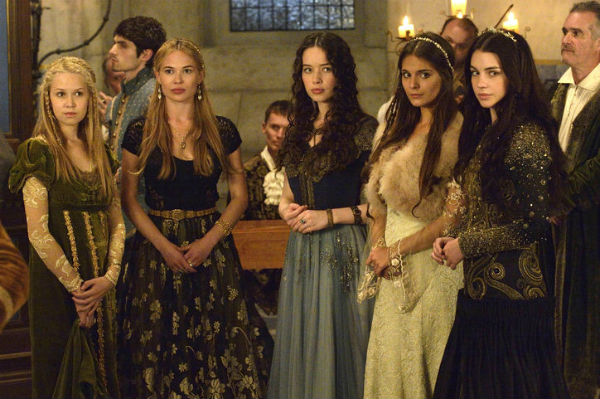 From left to right: Dearly departed Aylee in a vintage dress and lace body suit by Free People; Greer in a vintage skirt, corset, belt, and jewels; Lola in a vintage ’50s gown with corset; Kenna in a vintage gown and shrug and Lanvin fur; Mary in an Alexander McQueen gown

For those of you who don’t have the CW show programmed into your DVR (what are you waiting for??), a quick summary: teenage Mary Queen of Scots lands in France, along with her ladies in waiting, to marry dreamy Francis, the immediate heir to the French throne (or is he?). Yes, liberties are taken along the way in terms of historical accuracy, but whateve—it’s good soapy fun with palace intrigue, a really good love triangle, and majestic gowns.

So who better than to talk about romantic, swooning, heart-palpitation-inducing Valentine’s Day style than the show’s costume designer, Meredith Markworth-Pollack? Meredith—who incidentally also oversaw wardrobe for another one of my favorite fashiony shows, Hart of Dixie—was more than happy to demonstrate that there’s even more to learn from European history, well, the CW version anyway, especially how to dress on the most romantic day of the year. (Plus, share a few fun tidbits on the show for fellow obsessives.) We may be giving a quiz later, so you might want to take notes. 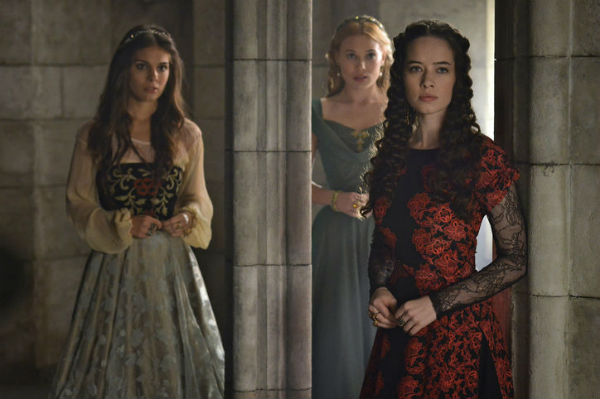 The ladies in waiting from left to right: Kenna in a Marc by Marc Jacobs blouse, a vintage embroidered corset, and a custom skirt; Lola in an Alice by Temperley dress; Greer in a vintage gown and brooch

If you want to dress JUST like Mary or her ladies in waiting, it’s actually pretty easy.
Meredith actually shops current brands and then tweaks and customizes the pieces to create a wardrobe that looks just 15th century enough, but without the stuffy, overly dramatic costumey effect. Since Mary is, well, a QUEEN, she calls dibs on the fancy stuff, like Alexander McQueen, Stella McCartney, Gucci, and Oscar de la Renta.

For the ladies in waiting, the labels are a bit more approachable. “Free People is always a big go-to because when I think of a designer or a line that really embodies romantic and bohemian I really think of Free People.” The designer also heads to L.A.-based Les Habitudes, Anthropologie, its sister bridal line, BHLDN. “I’ve been buying a lot of wedding gowns from BHLDN and either tweaking them, dyeing them, or just using them straight off the rack as everyday gowns on our girls because they have such a great vintage approach to their aesthetic.”

Play with dreamy but strong colors and textures.
Meredith veers toward lots of “muted palettes” with embroidery, brocade, beading detail, and luxe silks for dressing her girls with a romantic period piece (with an edge) vibe. Although, if you’re “a little more of the sultry vixen that Mary can sometimes be,” try experimenting with “structured black dresses with and metallic details.”

Sometimes more is actually less—just ask another royal style icon, Kate Middleton.
“Mary does a lot of long sleeves, and I love them. I think that’s really sexy even though you might think the more skin, the more sexy—especially for something like Valentine’s Day,” Meredith explains. “But sometimes it’s the opposite—the less you reveal is even more sexy.” Temperley, another one of the Duchess of Cambridge’s go-to labels, is a Reign favorite for long-sleeve silhouettes.

Have fun with the accessories too.
“Match [your outfit or dress] with a great hair accessory or a great bold lip color. Or a really sexy dangly earring. I’ve been finding some great ones on BHLDN or the Outnet.”

“Don’t be afraid of a corset.”
Say what? “I’m starting to see not traditional corsets, but corseted tops or pieces out there, even in the lingerie world, that you can wear as a day look. It’s not that crazy to throw a corset over a blouse with a long peasant skirt and wear it as a day look. I think it’s gorgeous and beautiful as long as you’re playing around with the fabrics and the colors to make sure there isn’t one piece that’s a little too bold or a little too crazy.” 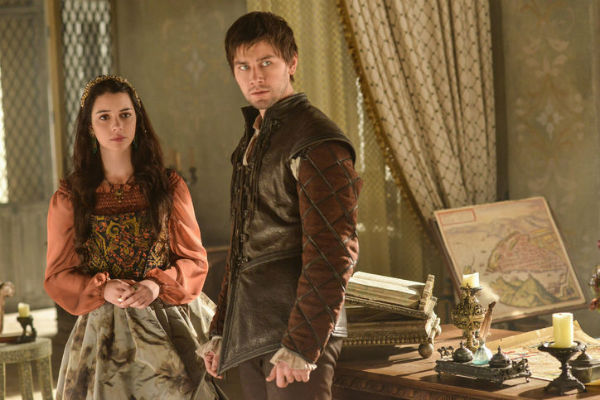 Mary in a custom blouse and skirt and corset from Les Habitudes, plus a headpiece from Paris Tiaras; Sebastian wears a custom leather doublet

SPOILER ALERT: Now let’s talk about the royal wedding.
No, not that one. Word on the street: By the end of the season, Mary will be walking down the aisle, but with whom? Francis or his hunky illegitimate half-brother Bash?! (Again, historical liberties, but just go with it.) And more importantly: What will her dress look like?! Meredith can’t give too much away, but she will say this: “We worked with a contemporary bridal designer who’s a favorite and we used one of his or her dresses. It’s just stunning and I’m so thrilled about it.”